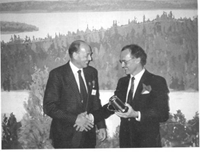 Transfer of Presidency from Bill Gairdner to Dieter Heckmann

The Canadian winter ski resort Morin Heights has invited in February 1980 104 masters cross-country skiers from the U.S., Norway, Sweden, Switzerland and Canada to participate at the first “World Masters XC Championships”. In Uppsala/Sweden in February 1982 already 350 masters skiers have competed at the 2nd event.

Foundation for the yearly organized and Masters World Cups called events has has been layed by the Canadian Bill Gairdner in Uppsala when he proposed the founding of a worldwide masters association. All participants have accepted his ideas.

Representatives of 14 skiing nations met in Zürich on June 13, 1982 and concluded the foundation of “The World Masters Cross-Country Ski Association”, called WMA.

Most important facts determined during foundation meeting were:

Starting signal for the 1st official Masters World Cup has been given in Telemark/Wisconsin, USA in February 1983 for 520 participants from 20 skiing nations.

Awarding of an event is being made 3 years ahead through the Board Members of WMA.

One of the main goals of the masters movement and WMA - in addition to the physical exercise on skies and fair contest in the tracks - is to contribute also the understanding among nations.